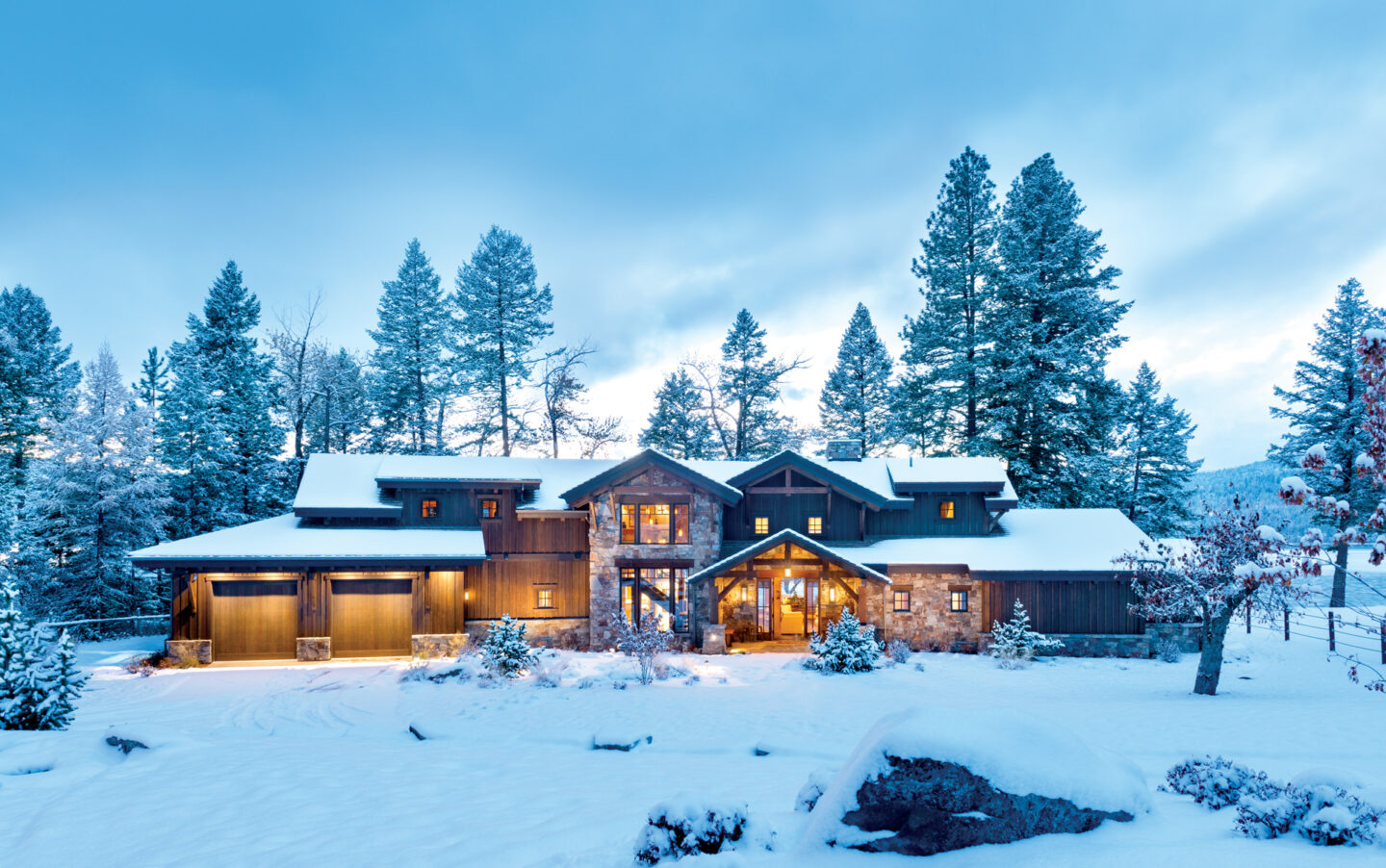 At Home in Montana

﻿A retiring couple build a lakefront timber-frame home designed around their “must-have” list of amenities.

After building a marriage, a family, careers, and a life together, Pat and Rick set out to build their forever home. The retiring couple envisioned a home that embodies their active lifestyles, accommodates their desire to entertain friends and family, reflects the natural environment, and is a permanent asset to the surrounding community. Their 4,200 square-foot timber-frame lakeside abode in northwest Montana is everything they hoped for and more.

Intent on a timber-frame home, Pat and Rick easily settled on Centennial Timber Frames of Kalispell, Montana. Owners Will Koness and Ken Ellis allowed the couple to come to their yard and watch their crew work. “They were artists!” says Rick, who was sold at first sight. “They were open, honest, and true craftsmen who obviously love their work.” Rick knew that ensuring the success of their project would take more than just stellar timber framing—he needed a team knowledgeable and adept at working with timber-frame construction to utilize and showcase its attributes and understand its parameters. Rick asked Centennial for a list of architects who are savvy with timber design and soon enlisted architectural designer Scott Elden of Montana Creative. Rick and Pat sent Scott their “must-have” list: all rooms having lake views, an expansive and centrally located kitchen, a dual-use bedroom/craft room to accommodate Pat’s spinning and weaving, an office for two, and a shop for Rick to shelter his pursuits and tools. Scott incorporated these elements and his own insights into their three-bedroom, four-and-a-half bath forever home.

Scott in turn suggested Sunrise Builders for the construction. Owners Gil Presnel and Stan Converse knew the rewards and challenges of overseeing, coordinating, and collaborating a timber-frame project, especially one an hour away; more importantly, they knew how to address them. “While working with Ken at Centennial, our framing and their timber framing went hand in hand” says Stan. “We’d set, then they’d come in and set timbers, then we’d set again.” Ken readily agrees, “Our timelines were interwoven. There was no lag time; no one was waiting. It’s the perfect example of how it should work, can work, and did work.” Centennial set over 250 radio frequency kiln-dried Doug fir timbers from Oregon with an 8-10% moisture content. The 10” x 10” timbers with free-of-heart centers help eliminate checking. In other words, they don’t move.

Gil and Stan are quick to highlight the input of others. They knew what their crew and subs were capable of and gave them the freedom to do it. Weekly team meetings kept everyone informed, inspired, and constantly working together for ways to improve the project. “They all did that,” says Rick. “They all came to us with ideas. It just made the whole house better.” This leapfrogging of creativity and mutual respect started at the onset with site prep and carried through to the end, much of this led by Norse, Sunrise Builder’s onsite manager, finish carpenter and perfectionist. “A lot of thought from the entire team went into site work,” says Stan. “We had good collaboration with Jim (Doepker Landscaping). The site work was pretty amazing just in terms of drainage and setting the house farther back from the shore than originally planned. What you don’t see, what’s going on underneath it, is very impressive.” Showcasing the fireplace rock was important to Pat and Rick, who didn’t want it covered by anything. So, Dustin from Anderson Masonry, Inc., hid the electrical outlet behind a removable rock. And he set all the landscaping rock. “He was incredible!” praises Pat. Pat described their electrical engineer as “an unsung hero,” noting that he had one of the hardest jobs of all—putting in the wiring and accent lighting, coordinating with everyone, and working around all the timbers and masonry. Gil points out the guillotine fireplace screen that lifts straight up into hearth. “The iron work isn’t just beautiful, it’s innovative,” he says of the work by Greg Hanzel (Damon Designs), who also hand made the chandeliers and railings.

Pat, a passionate cook, revels in her new kitchen, which features Corian counters and a granite-topped island. Friends and family gather around the kitchen island prepping pizzas to cook in their outdoor wood-fired pizza oven. Located on the covered patio just off the dining and great rooms, it’s conveniently accessed year around. Dustin, the mason, shared his dough recipe with Pat, who then added her own twist. At 1,100 degrees it takes about 3-4 minutes to cook 6 personal pizzas at once. It’s true that lake views add flavor, but it’s unanimous: Pat is a culinary whiz.

The whole project took 22 months from groundbreaking to move-in. The fruits of that effort are realized every day and will be for generations to come. “The house was just fun to build,” says Stan. To Pat and Rick, the home is just fun to live in.