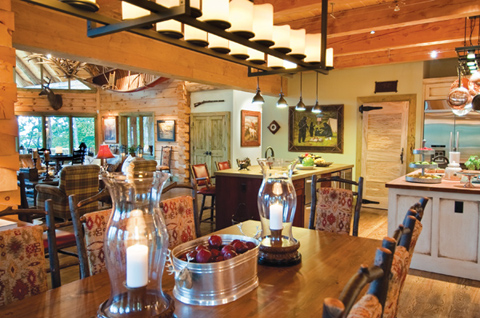 When Allen Morris’s father first purchased vacation property and built a cottage nestled in the hills of Black Mountain, North Carolina, in 1970, it was with the hope that his children and their children would gather there for years to come.

Little did he know then that more than 40 years later, the family’s retreat would grow to encompass five homes, including Allen Morris’s log home and corporate retreat. “As our family grew we built a second cottage and a third cottage and a fourth cottage,” says Morris. “The first was called OutaSight and the next was called OutaMind. By then my parents wanted a place of their own, which they called OutaBounds. My sister’s house is called OutaTown. I’m the youngest of the three siblings, and as my children started growing up and having children of their own, I built my own place called OutaSpace.”

At 8,373 square feet, Morris now has plenty of space in his home to welcome his four grown children, grandchildren, friends, and corporate retreat participants. OutaSpace sits on just over 21 acres of prime western North Carolina mountainside, sited to enjoy views of the town of Black Mountain and the Black Mountain range beyond. 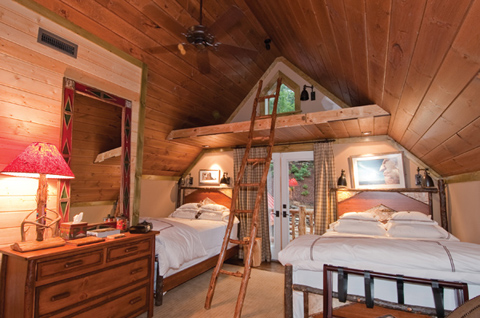 “When we started construction in 2007, I wanted to address the main things I had seen wrong with log houses,” says Morris. “The rooms were often too small and too dark and they were not really situated to take advantage of the natural light. I took trips to the mountains with my maps and topographic charts and compass and I picked the exact location to capture the setting sun at the winter solstice.” As a result, OutaSpace captures the maximum amount of sunlight in the winter months but is protected from the higher summer sun by the roof overhangs. “We get magnificent sunsets off of the great deck,” says Morris.

Environmental concerns were a priority to Morris, so he sought a log home producer that would be able to help him attain LEED (Leadership in Energy and Environmental Design) certification. As president of a commercial real estate development company, The Allen Morris Company, Morris had the knowledge and interest to research the technical aspects of log home building. After doing his homework, True North Log Homes, based in Bracebridge, Ontario, seemed like a natural choice.

True North Log Homes prides itself on the application of advanced technology to traditional log home designs, resulting in homes that are more efficient, require less maintenance, and offer modern comfort. The company stands behind its homes by offering a 25-year zero air infiltration warranty. “My father and I started the business in 1986,” says Rob Wrightman, CEO of True North Log Homes, noting that as an innovative family, they hold 17 patents on their log home technology, with more on the way. “The majority of the wood we use is northeastern white pine from Canada,” says Wrightman. “It’s slow growth so the growth rings are tighter together which makes it more dimensionally stable and a superior product for a log house.” 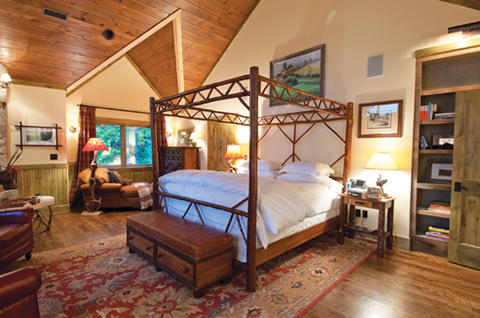 Allen Morris found that True North’s technology was just what he needed to attain LEED certification for his log home. “Mr. Morris came to us because he wanted LEED certification and it was our technology that helped him make the decision,” says Wrightman. He adds, “The house is a masterpiece.” Some log homes leak air because when the building shrinks the joints between the logs open up and allow air infiltration. “What we do differently is we’ve designed our assembly components in such a way that when the house shrinks, the house gets tighter instead of opening up,” says Wrightman. True North Log Homes has built homes all over the world and in every state in the U.S., including Alaska, and has found that their homes perform well in every climate. “Every climate has its anomalies—our product is very successful in different climates because of the way the technology works. We’re using the natural shrinkage to our advantage. Why fight it?”

Reclaimed barn wood is used throughout the interior, including cabinets, bathroom vanities, and shelving. “We selected building materials that did not have to come from more than 500 miles away; in fact, most came from within 20 miles of the property,” says Morris. All of the home’s appliances were chosen for optimal performance and energy efficiency, and are Energy Star® certified, including the Rinnai tankless water heaters and low-flow toilets. Use of low-VOC (volatile organic compound) paint and hardwood floors instead of carpeting helps reduce harmful toxins.

The main level encompasses the kitchen, dining, and great room, which flow together with a view through the two-story windows to the massive deck and property beyond. Also on the main floor are three bedrooms, each opening up to covered porches and patios. The master bedroom, study, and a fifth bedroom are on the second story. 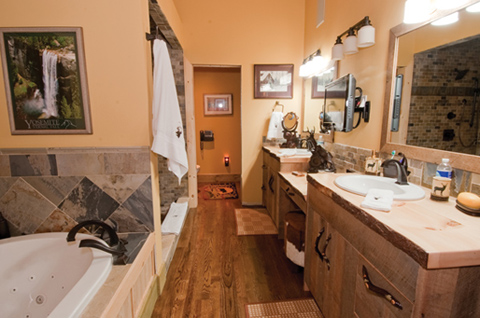 Every aspect of the home’s inspiration and décor seamlessly infuses a sense of family, including memories of past family vacations. “The main inspiration for the home was the Yellowstone Lodge,” says Morris. “I’ve always taken my kids to the great National Parks—to Yellowstone, Yosemite, Glacier, the Everglades in Florida.” Morris asked his (now grown) children to choose a national park to name their bedroom after. “Each bedroom has the name of a national park carved on the door. The master bedroom is Yellowstone. My son chose Crazy Horse, and my daughters chose Bear Tooth, Grand Teton, and Grand Canyon.”

The lower level of OutaSpace is ideal for corporate retreat guests. “We have a bunk room with bunks to sleep nine men in one room,” says Morris. “We call that the Badlands, after Badlands National Park.” The fitness center, also on the lower level, is named Mount Mitchell after a nearby mountain peak said to be the highest peak east of the Mississippi River. And, of course, there’s space for relaxing on the lower level as well: an expansive entertainment room with a kitchen, pool table, darts, and a cowhide poker table. French doors open to a patio with a hot tub for ease and relaxation. 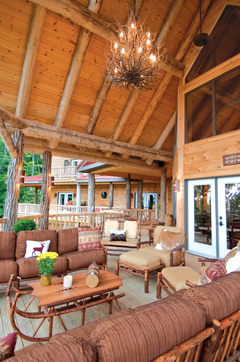 The 20-plus-acre property slopes away from the house, offering natural areas to explore and gather. Landscaping was minimized to make the house as environmentally friendly as possible. Only native, drought-resistant plants were used so that no artificial irrigation is required.

“We drilled a well and have running water that starts at the front of the house and cascades down to a pond below the deck so when you’re sitting on the deck you can hear the sound of the water running below,” says Morris. The water is recirculated to ease impact on the environment. The property also has a fire pit for evening gatherings, and a chapel in the woods that seats 24 on split-log benches. “There’s no roof over it, just the natural foliage of the trees,” says Morris.

With no televisions but plenty of outdoor diversions, OutaSpace is the perfect setting for the busy Morris family to reconnect. There’s time for games, reading, hiking, or playing on the playground Morris installed for the grandchildren, whether visiting during the summer or for holiday get-togethers. “In 1979 we decided to make it a tradition to go to Black Mountain for Thanksgiving,” says Morris. “We have an annual photograph of the family here every Thanksgiving. Last year I had 34 family members at my house for Thanksgiving dinner.”

OutaSpace has plenty of space for family, friends, and guests, and that’s really the whole point. “I built the house as a legacy project for my grandchildren and great grandchildren,” says Morris. “The whole purpose from the beginning was a place for the family to gather.”