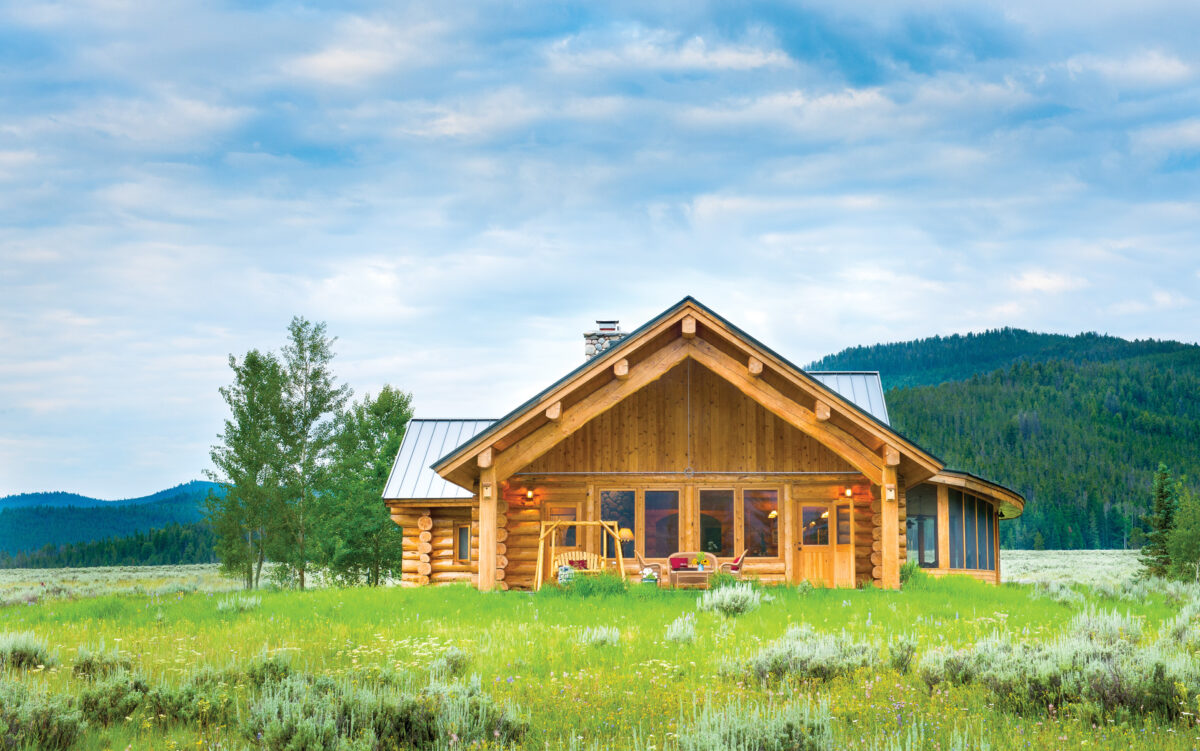 A new chapter in a Montana family’s history includes a full-scribed handcrafted log home with logs from Yellowstone National Park.

Sometimes, a house is more than just a house; it’s part of a story. That’s the case with this summer cabin outside West Yellowstone in Montana. Built on 200 acres of lakefront property, it is five miles down the road from property that has been in the homeowner’s family since 1932. It’s a truly remote piece of paradise, on a dead-end, unpaved forest-service road 30 minutes from the town of West Yellowstone, with the Gallatin National Forest all around. In the wintertime, the snow piles up and the road is closed, so there is no access until the snow melts in late spring.

The homeowner’s grandparents built a simple cabin on the lake, where her father spent his boyhood summers. When her parents married, they bought the cabin next to the family cabin, and the homeowner and her siblings spent their own childhood summers there. They all grew up and brought their own children, who are now also grown, and so the story continues.

The homeowner originally built a small, dovetailed chinked log cabin on her parcel, with a view of the whole lake and all the way up to Yellowstone National Park. When the adjacent fly-fishing guest ranch went up for sale, she had a decision: watch as the 440-acre property was divided and developed or buy the parcel herself. “I decided to buy the ranch,” she says. “So, then I had to figure out how to run and manage a fly-fishing guest ranch. I needed a bigger house and an office, and that’s when I built this house.”

The new house, a full-scribed handcrafted log home, was built of all-local materials by Blair Anderson of Hilgard Builders in West Yellowstone, Montana. “The log walls were built from lodgepole pine that came from Yellowstone National Park—they were developing an RV parking area near Yellowstone Lake, so we had this unbelievable resource for timber that’s rarely available,” says Anderson. “The Douglas fir roof timbers came from an old ski area at Targhee Pass, just over the border in Idaho. The owner of the property wanted to get some of those timbers off the ski area property for fire management, so we were able to utilize them.”

The home’s design is the result of a true collaboration between the homeowner, builder, and architect Jamie Logan of J. Logan Architects in Boulder, Colorado. “[The homeowner’s] history living in the area and the fact that she was able to incorporate things that she liked from family cabins into this dream house was a big part of it,” says Anderson. “And Jamie is a really good listener and has an ability to design homes that have a great flow. It was a great team effort.”

An experienced craftsman, Anderson’s attention to detail is evident throughout the house. The structure was meticulously built in the Hilgard Builders log yard, each Lodgepole pine log lettered and numbered, then disassembled and completely rebuilt on site. “It’s amazing to watch,” says the homeowner. “Blair Anderson and his crew were phenomenal. The skill!” The remote location added some twists to construction, so the team staged materials before snow made the road impassable, then snowmobiled to the job site over the winter and into in the spring.

The fireplace was another wonder of hand-built construction; rocks from the nearby Madison River were painstakingly fit into place one by one, like a jigsaw puzzle. Local craftspeople added elements throughout the home, including the railings, cabinets, and Douglas fir flooring.

The house is “just right” sized—spacious at just around 5,000 square feet, but with an efficient use of space. There is a master suite and an additional bedroom on the main floor. “I wanted enough beds for all my family members, but I didn’t want a million bedrooms, and I wanted a kitchen where everyone could help cook,” says the homeowner. The solution was a loft with space for two queen-sized beds, that doubled as a play area for the children, and an apartment over the garage for the nanny. The highlight of the home is the sleeping porch, which has a curved wall of screened windows overlooking the lake and a big bed. “We always grew up with a screened-in sleeping porch at our grandmother’s house,” she says. “We eat out there and sometimes sleep out there, but even if I don’t sleep out there I go out early in the morning and curl up under a pile of blankets with my dog and my tea, and you can listen to the creek and the birds.”

The home is bright and airy with plenty of natural light on long summer days. “All the old cabins are very dark, so we put a big skylight in the center to help the interior,” says the homeowner. “We planned the windows so there’s lots of natural light.” They also foster a connection to the gorgeous natural setting, says Anderson. “The windows bring the outside into the house, so you feel like you’re in touch with the beautiful Yellowstone surroundings even when you are inside the house.” With 360-degree views in Big Sky country, it was tough to decide how to orient the house. “Each of the views is so beautiful. I used to joke that I was going to put the house on a Lazy Susan,” says the homeowner.