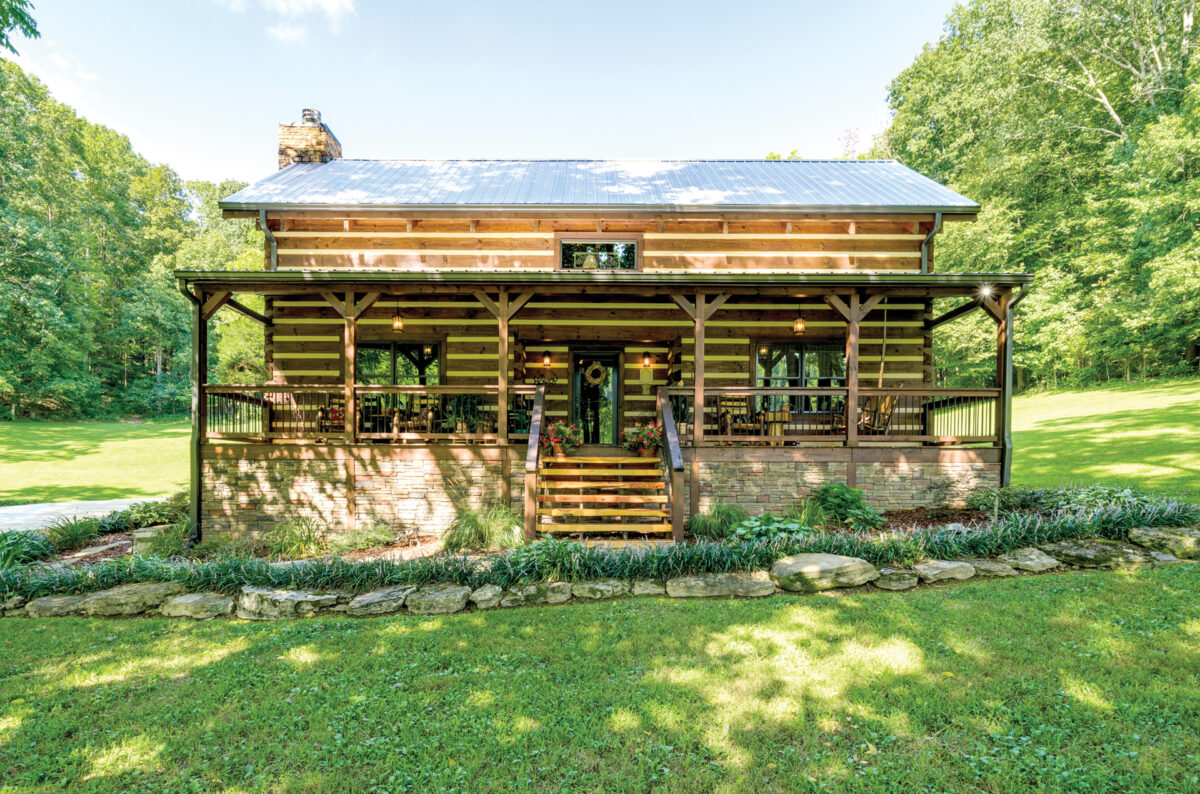 A heritage-loving couple created a home that encapsulates their love of nature, history, craftsmanship, and one another.

More than 200 years ago, settlement of this land began. Before that, it was bountiful Cherokee and Creek Indian hunting ground. Earlier still, indigenous peoples made their way through lush valleys, alongside clear streams and across forested hills, where they spent their summers planting squash and corn and living off wild game until the circle of life led them back to their winter camps.

It is in this sacred place that Cindy and Roger Shaneyfelt built their log cabin just as early settlers would have done: on the swell of rich, dark earth, backed by abundant woodland and fronted by a nourishing creek. 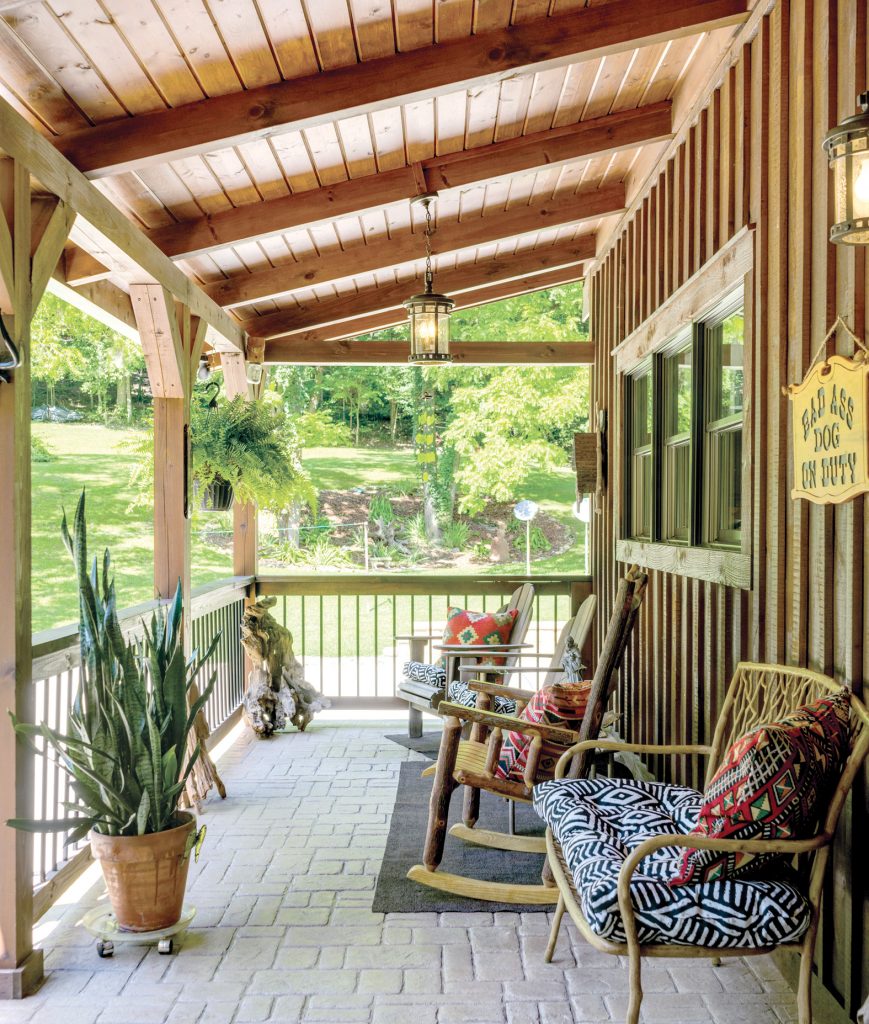 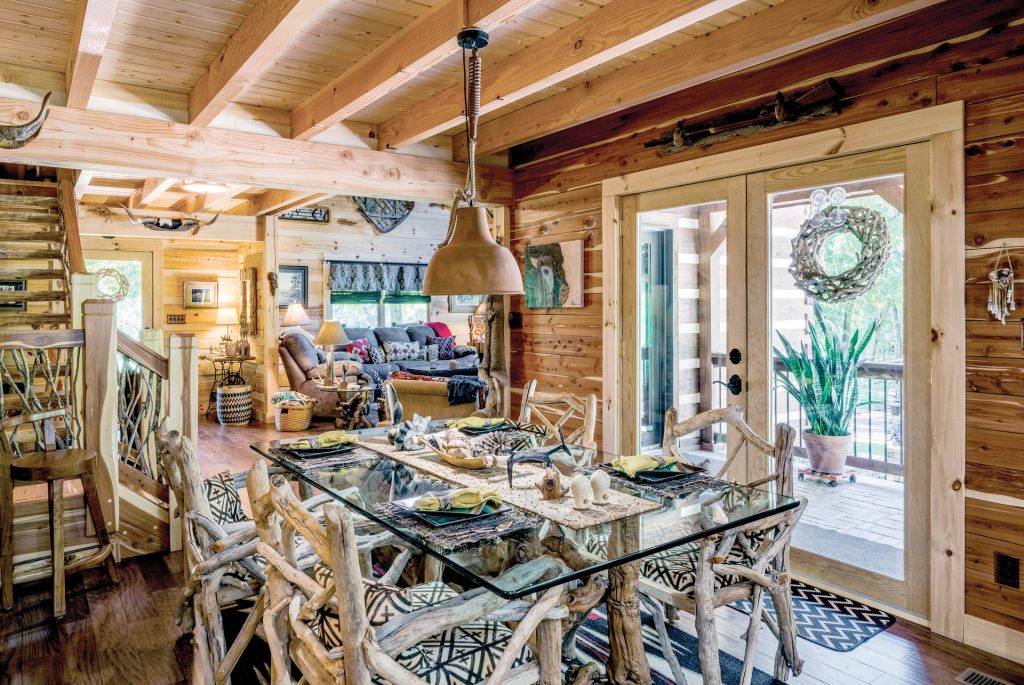 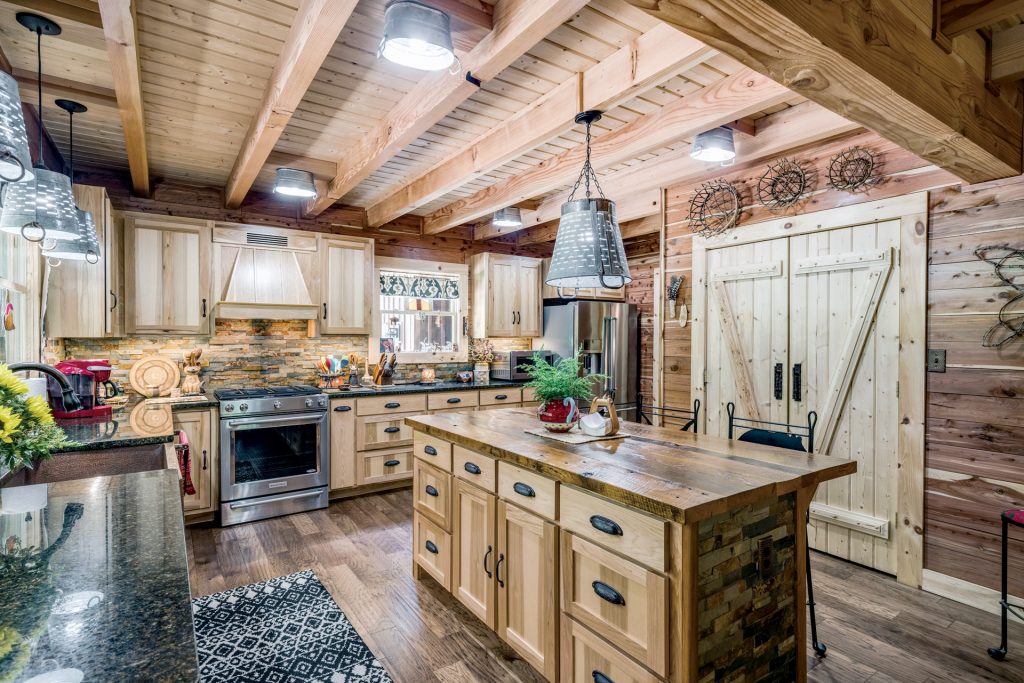 “We’d always wanted a log home that resembled an historic Southern cabin,” said Cindy, whose 2,980-square-foot cabin appears to have been in place for centuries despite having been finished only four years ago.

The Shaneyfelts purchased 50 verdant acres near the Alabama border in southern Middle Tennessee a long time ago, but it took time, commitment, and an inordinate amount of manual labor to prepare the site for building the home they’d sketched on graph paper and dreamed of creating together. 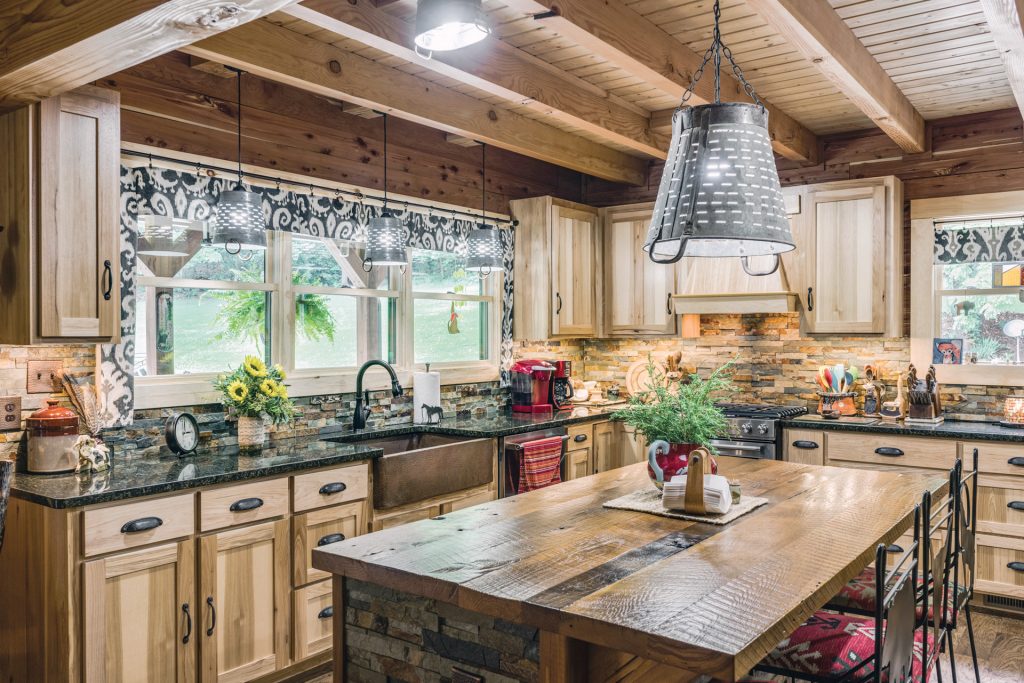 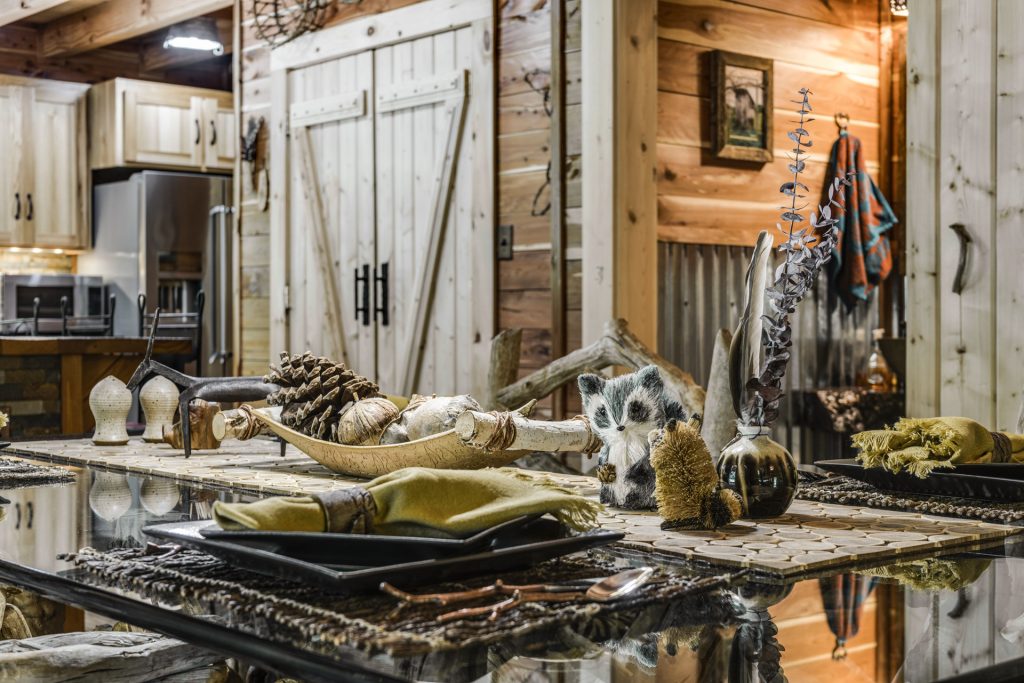 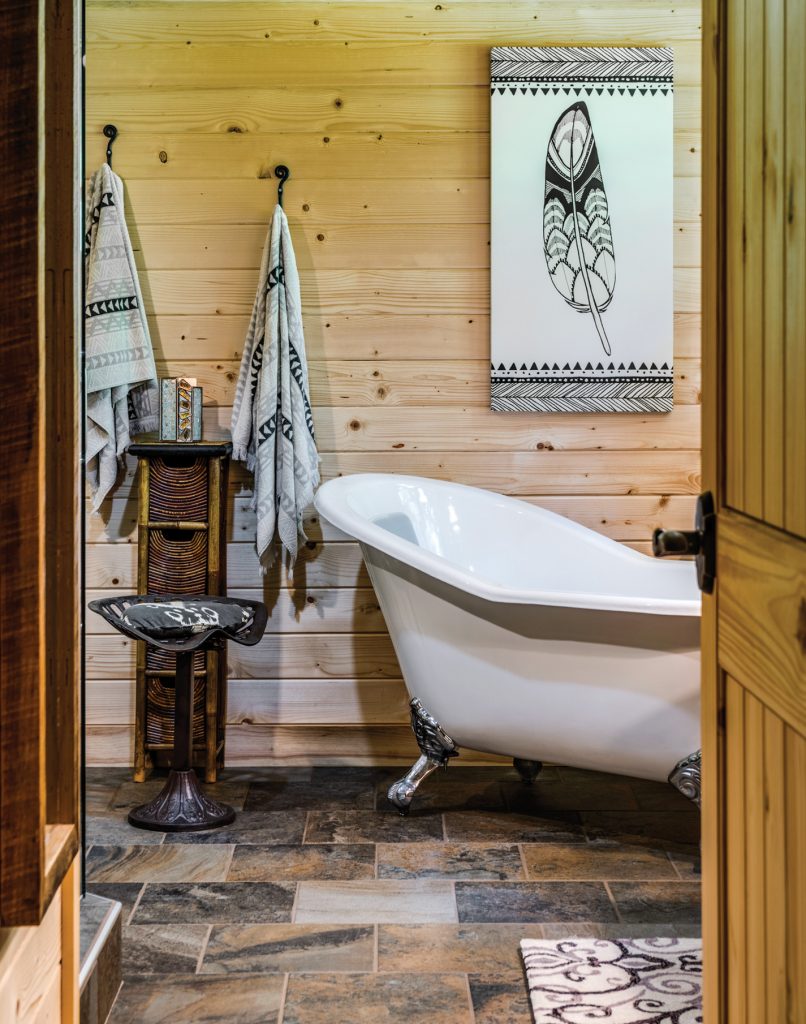 “We did so much cleaning up,” Cindy recalled with a shudder. “Car parts and just trash. It was awful. Overgrown, too. We hauled off more than 300 tires from here!”

When the land was finally ready, the couple selected Honest Abe Log Homes, headquartered in Moss, Tennessee, with sales representative Ethan Birdwell as navigator to help design, manufacture, and erect the home.

“We wanted the old chinked-style square logs with the spline between each log,” Roger said. “We liked Honest Abe’s log system, which has less settlement and structure shrinkage. Honest Abe was also very willing to work with us on the custom design and on changes.” 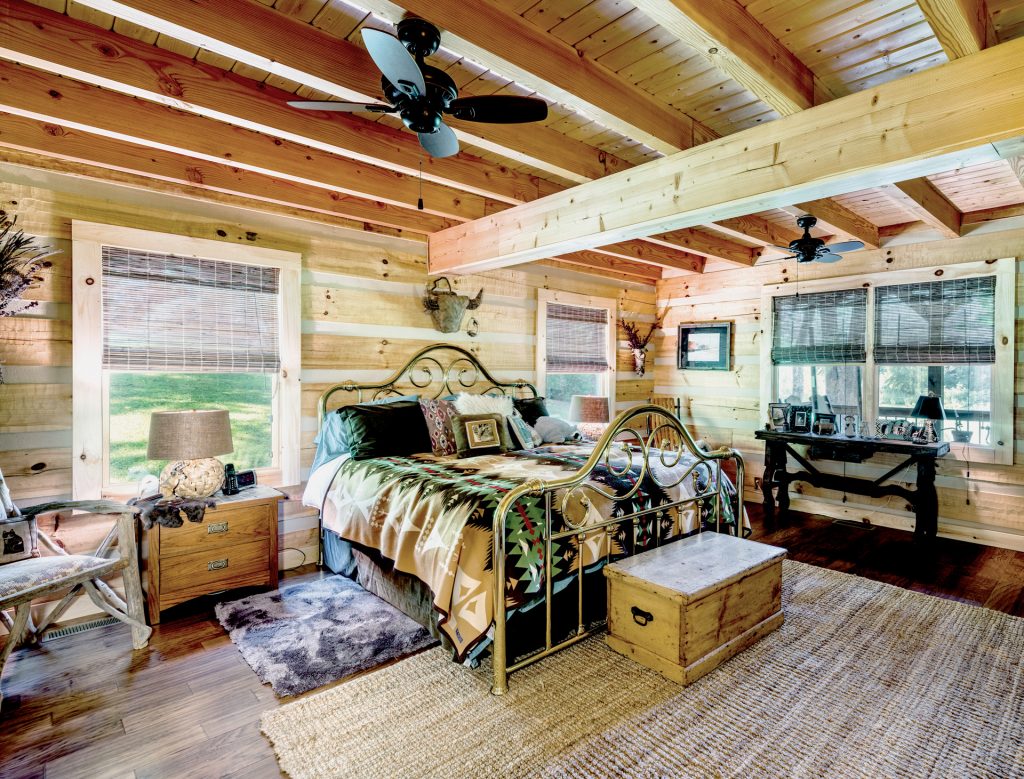 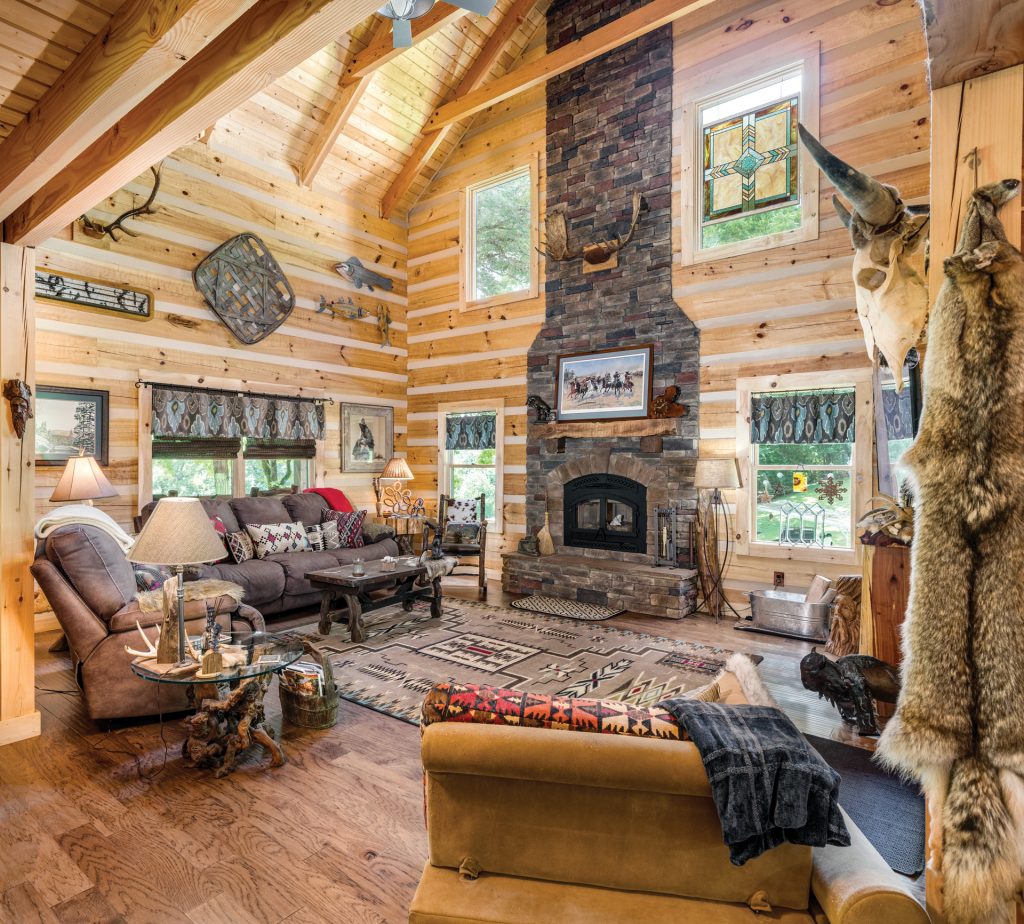 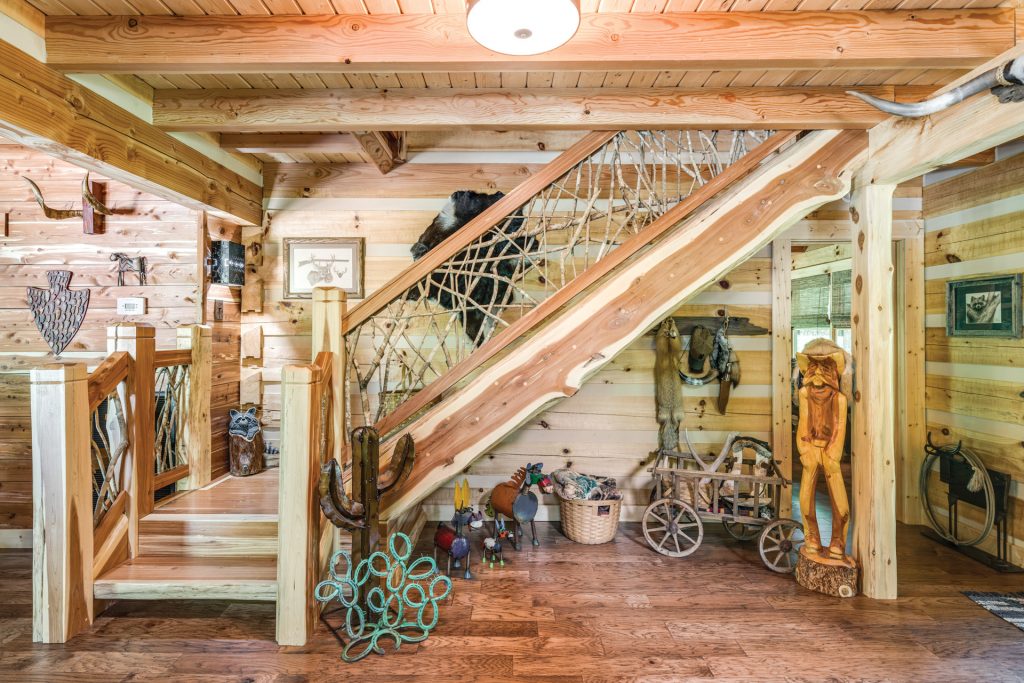 Honest Abe designer Melissa Copas drafted the completely customized plan from the couple’s original drawing. “We designed the home based on our specific needs,” said Cindy, who had lived in both a 150-year-old log cabin of square poplar logs and a more modern house with round pine logs, an experience that helped her understand what they needed to achieve with the new design. “Ethan would send us a draft, and we’d revise it again. He never complained about our many revisions—seven, I think.”

The final, L-shaped plan incorporates a front-facing one-and-a-half story, hand-hewn log structure with a heavy timber roof system, while traditional frame and truss construction covered with wood board and batten forms the “L.” Entering from the front porch, an entrance hall is flanked by a living room and master bed-bath suite. Also on the main floor are the kitchen, laundry, dining room, mudroom and half bath. Two bedrooms and a full bath are upstairs.

“Roger wanted this house to appear historic from the exterior, and I wanted a vaulted ceiling in the living room,” Cindy said. “With Honest Abe, we were able to accomplish that.” 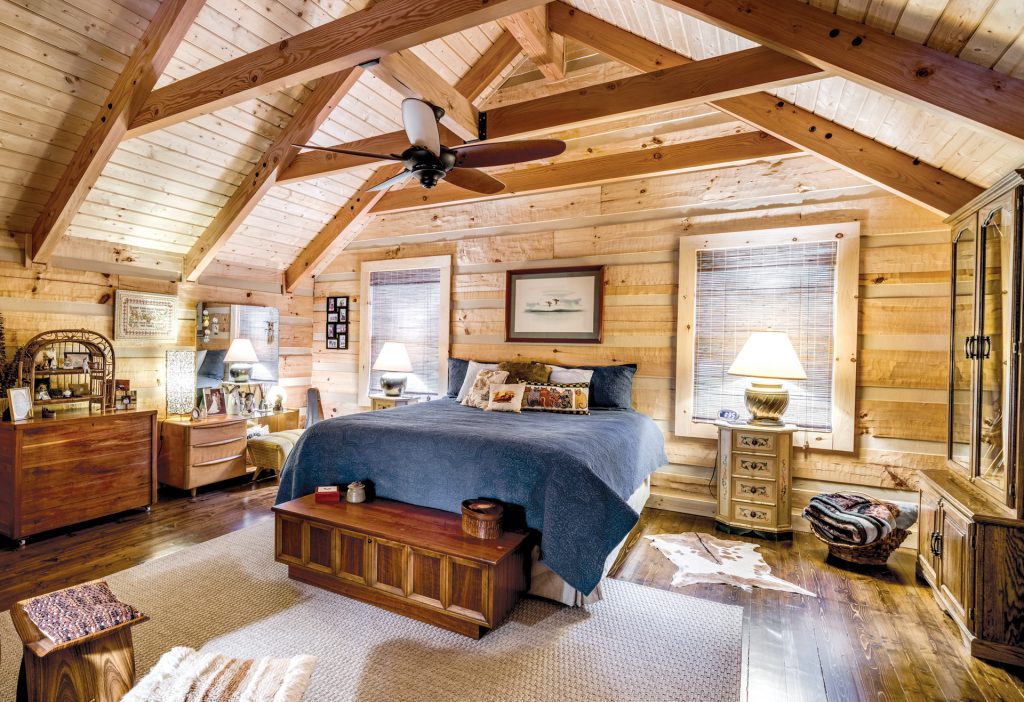 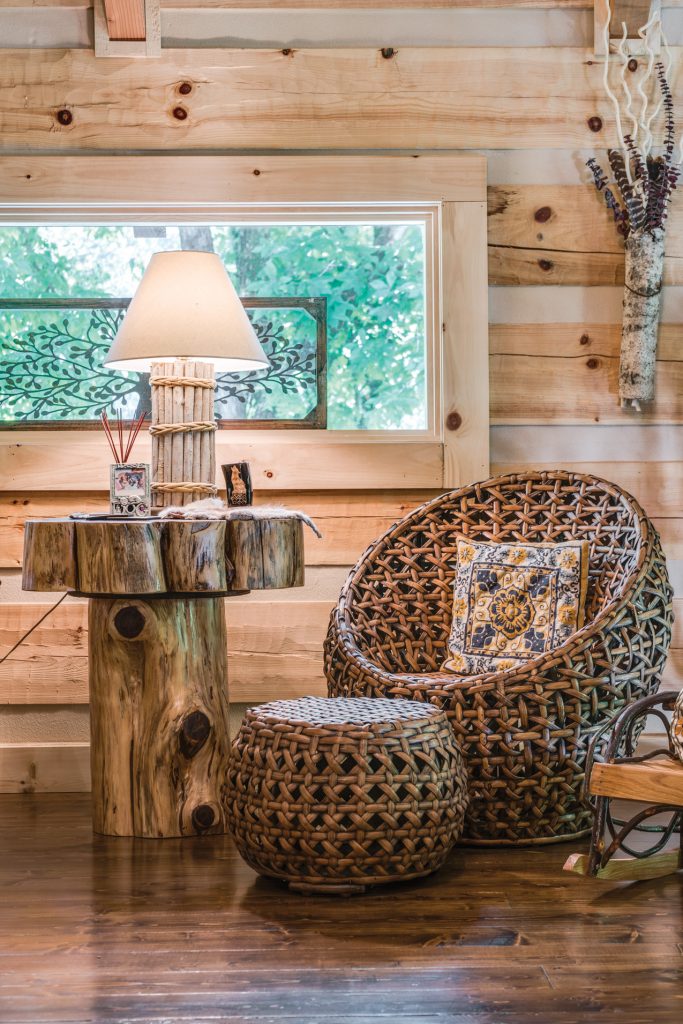 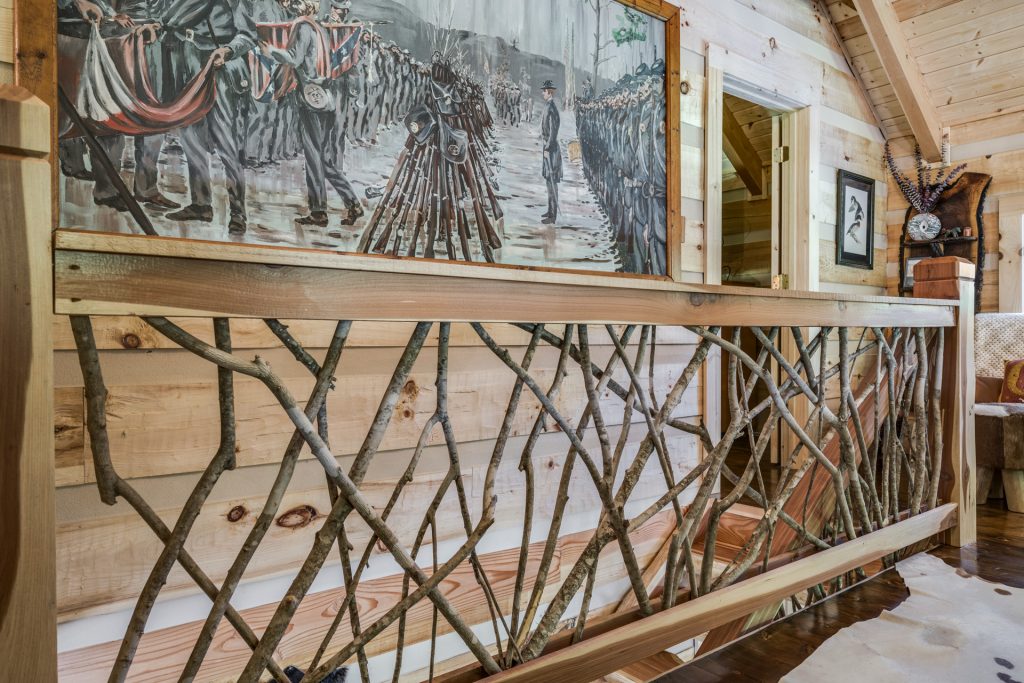 When the custom package was cut and delivered for construction, an Honest Abe construction crew, headed by Brian Ritter, was dispatched.

“It took only 13 days for the erection of the logs and the framing of the back part of the house,” Cindy said, still amazed at the speed and ease of drying in the cabin. “Brian’s crew was just awesome! Marty Wright, our contractor, took over after that, along with Rob Tucker and his carpentry crew, and it took us about a year to get it completed.”

During that year, on October 3, 2015, Cindy and Roger were married on the eight-foot-wide, full-length, covered front porch before an intimate gathering of well-wishing family and friends.

Channeling the cooperative spirits of couples who’d settled the land before them, Cindy and Roger worked side by side to achieve the finished living spaces, both indoors and out, that they had envisioned. From native Eastern red cedar wood acquired from a local sawmill, they planed and hung the horizontal boards covering several interior walls and lining closets and pantries. Cedar tree trunks were fashioned into pedestals for sinks and tables. Cedar slabs were used as front porch boards, as well as interior and exterior stair treads. A live-edge red cedar slice became the staircase skirting. They cut and dried privet bushes, and the branches became a dramatic substitute for wood spindles in the balcony and stair railings. Roger’s woodworking expertise, coupled with Cindy’s gift for decorating, produced what can best be described as “traditional-eclectic.” 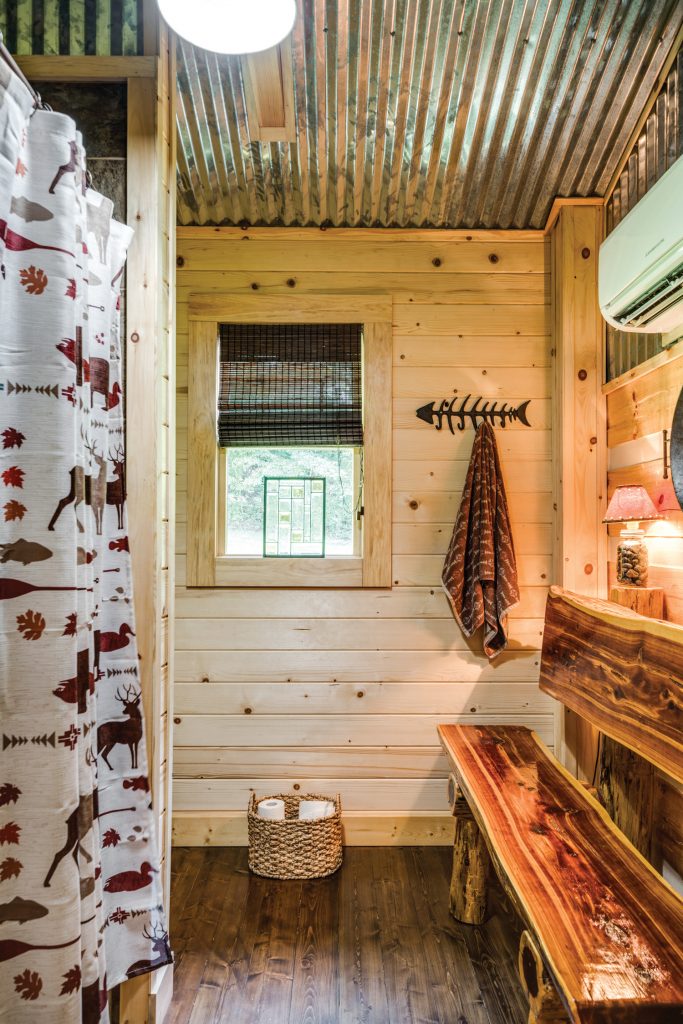 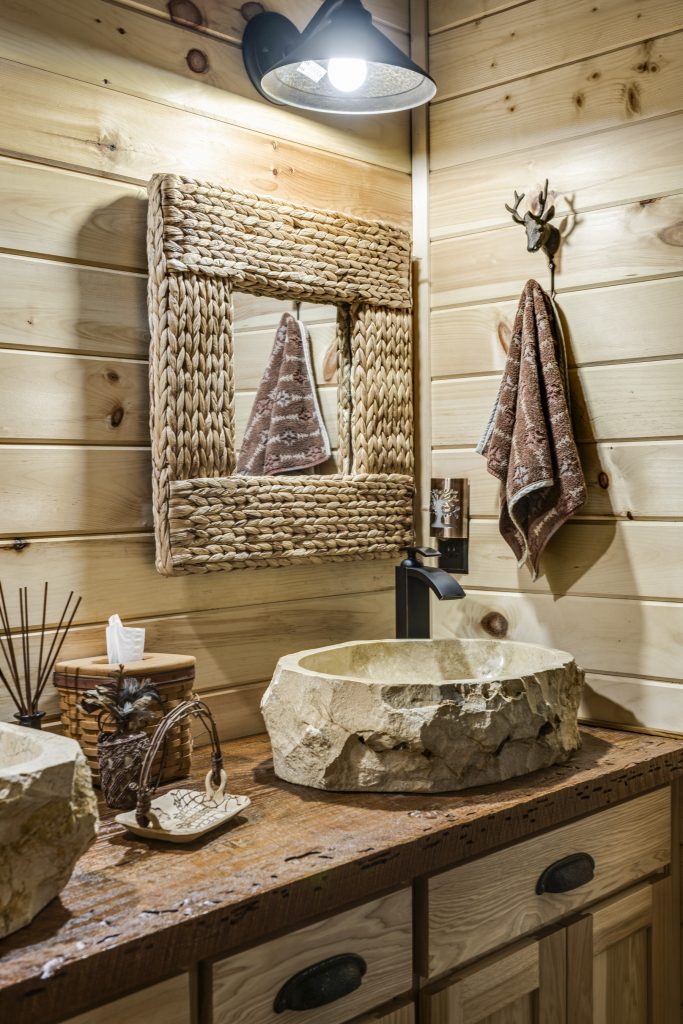 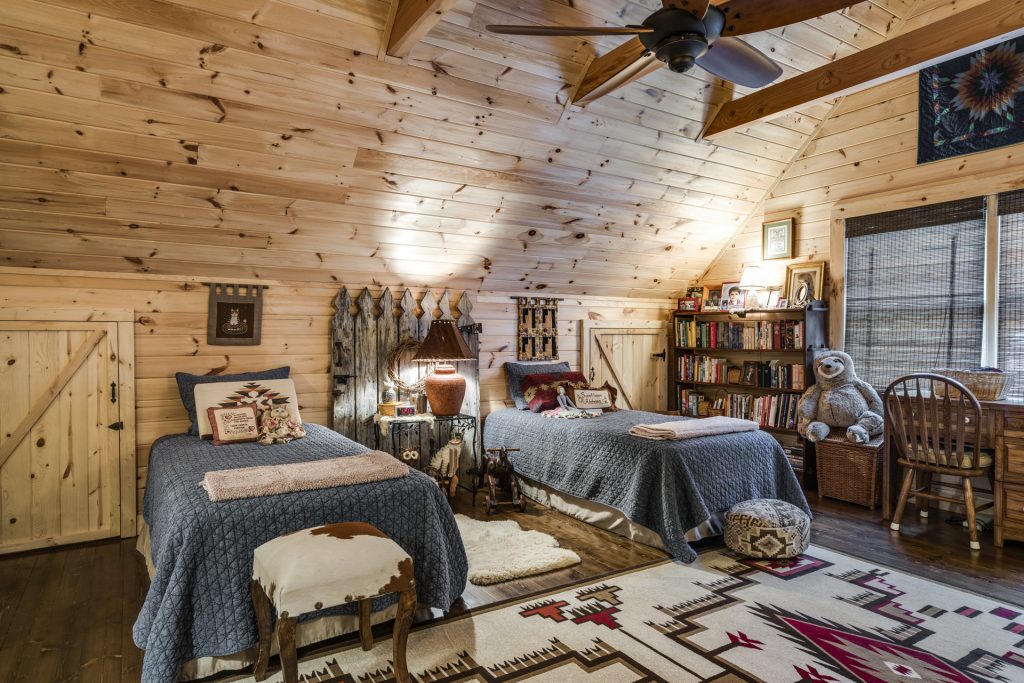 They hunted antique and junk stores for unusual items to convert into fixtures, like the vintage olive bucket that’s now a kitchen light, the galvanized washtub repurposed as a laundry sink, and the motorcycle spring that extends a terra cotta light fixture over the dining table.

From the weathered boards of a century-old Tennessee barn, Roger built countertops for the hickory kitchen island and bathroom counters. He crafted walnut wood from their own trees into mirror frames, tabletops, and a mantlepiece for the floor-to-ceiling manufactured stone living-room fireplace. He hollowed out a cedar log for plumbing, topped it with a vintage six-inch slice of rosewood, and installed a stone vessel and reproduction faucets to create a powder room laboratory that’s pure art. In the laundry room leading to a 768-square-foot double garage, Roger made work and storage spaces from fresh red cedar, while Cindy sewed curtains and curated a gallery of cat art with paintings and needlework by her and her parents, who were both talented artists.

Throughout the house hang paintings by Cindy’s father, Bill Seward, and in every room, there’s a reminder of Cindy’s mother, Nancy Robinette, whose fine needlework is displayed in frames.

“My mother passed away in 2014,” Cindy explained, adding that she’s woven pieces from her mother’s life into her décor. “The home had to have a dining room area big enough for my mother’s glass-top table with a cypress root base and four driftwood chairs.” 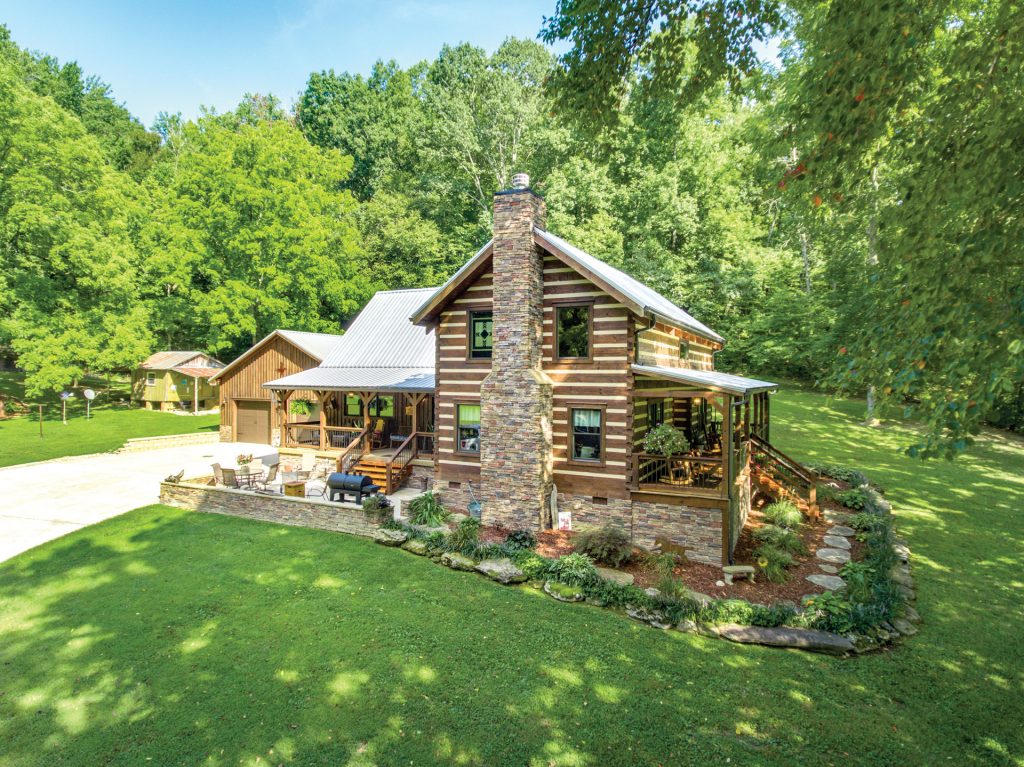 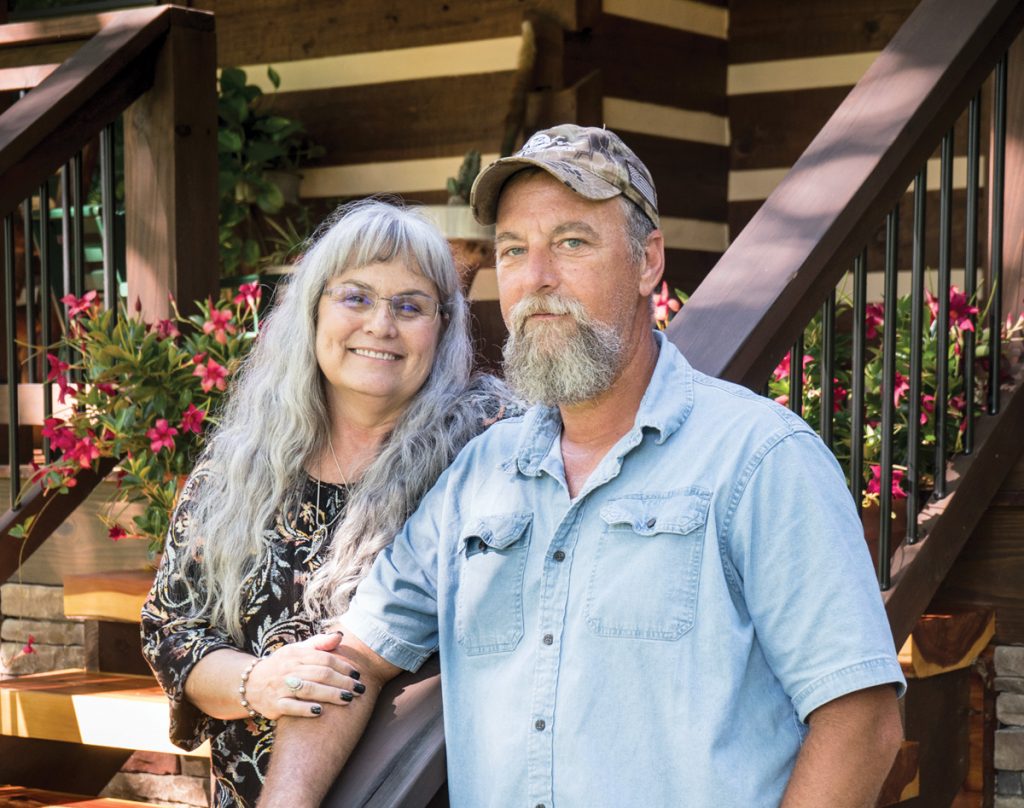 In a life inconceivable to Roger and Cindy’s Cherokee ancestors who roamed the land or the pioneers who tamed it, the couple reclaimed it for their own, sharing it with their three dogs, two cats, and the wildlife that beckoned and sustained the generations before them. “We have deer and turkey come in our yard all the time,” Cindy said. “We even have a possum that has been coming in our garage to eat the cat food and sleep in a little bed we have in there. We are off the beaten path. Peaceful. Content. Just enjoying life at a slower pace. It’s like a vacation retreat that we get to live in all the time.” i